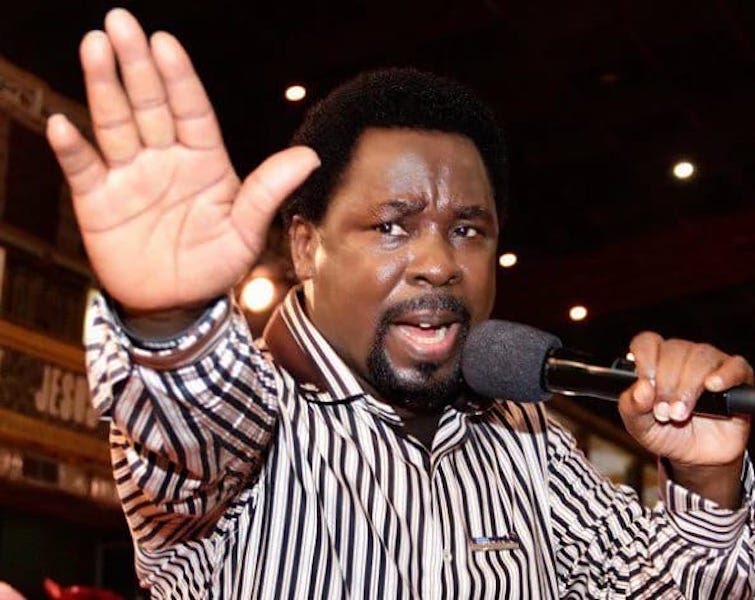 “The story that is being peddled around by some fake news merchants that my dearest friend and brother, Prophet T.B. Joshua of SCOAN, is dead is FALSE!

“It is FAKE NEWS in its most hideous form. The Prophet is alive and well and he shall live long and prosper. Glory hallelujah!”.

Reports had said the Founder of the Synagogue Church of All Nations(SCOAN) died after concluding a church programme.

The report not confirmed by his church went further to claim that his body has been deposited in a Lagos mortuary.

As a charismatic preacher, he claims to have the power to perform miracles and healing.

He also has huge following across Africa and Latin America.

On 3 June in a Facebook post on his TB Joshua Ministries account, he told his followers he would not be able to mark his 58th birthday.

He said this in a special birthday message.

“Happy Birthday to you! Viewers all over the world, June 12th is around the corner. As you know, I am a man of the people. So, the wound of one is the wound of all.

“As things stand, you may have realised it will not be easy for me to celebrate my birthday under the present circumstances. Some of the people who want to come are troubled by the situation all over the world. We see their fear and their worry. I feel their pain; I feel their worry.

“Therefore, let us dedicate this day to prayer and fasting. Don’t forget the needy. By the grace of God, more birthdays are ahead. God bless you! Emmanuel. Jesus is Lord! Happy Birthday!” – TB Joshua